The Joy of Christmas 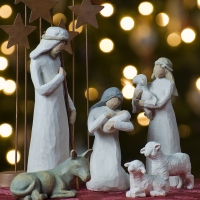 I have a list of people All written in a book And every year at Christmas time I go and take a look.   And that is when I realize That those names are all a part Not of the book they’re written in But of my very heart   For each name stands for someone Who has crossed my path some time And in that meeting they’ve become A treasured friend of mine.   And once you’ve met some people The years can not erase The... [read more]

When an old woman died in the geriatric ward of a nursing home in Moosomin, Saskatchewan, it was believed that she had nothing left of any value.   Later, when the nurses were going through her meager possessions, they found this poem. Its quality and content so impressed the staff that copies were made and distributed to every nurse in the hospital. One nurse took her copy to Alberta.    The old woman’s sole bequest to posterity has since appeared in the... [read more]