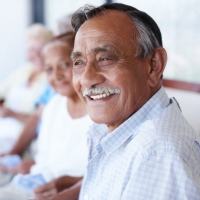 Canada's Seniors Are Independent. They Shouldn't Be Isolated, Too

In Ottawa, a House of Commons Standing Committee is presently hearing evidence about whether there should be a National Seniors Strategy. There are two reasons why this is long overdue and should be a priority for all MPs.

First is demographics: by 2031 roughly one in every four Canadians will be aged 65 years or older. As a country we are aging partly because people are living longer. And, as they reach retirement age they are likely to increase demand on certain services, like health. Secondly, traditionally the elderly tends to vote in greater numbers than younger people. This could have a major impact on all levels of government if seniors seek their interests met.

Baby steps to help the elderly

Earlier this summer, the Ontario Government announced an initiative to recognize municipalities that are taking steps to help the growing population of seniors stay engaged and active within their communities. And last month, it announced plans to build 40 new seniors centers in the province. These are a couple of examples of piecemeal efforts taking place across the country to tackle a massive problem everyone in Canada needs to recognize.

From my experience in the senior care industry, most seniors want to live independently for as long as they can. It gives them a sense of well-being and feeds into the generational culture of not having to rely on others. It is one reason our service has become so popular.

The latest research from Statistics Canada found there are now more people living alone than at any other time in our 150-year history. Many of those are seniors.

But being independent should not mean being isolated. It takes a village to raise a child and, in turn, every community should endeavor to support its seniors. Many of our customers tell me the interaction with the delivery teams is almost as important as the meals themselves. All of us need to understand that being retired should not result in feeling abandoned.

We place a great emphasis on recruiting people who understand how necessary it is to talk and listen to their customers. Many have experience as family care givers, so they understand that personal interaction is just as important as a business transaction.

National pride is at stake

The present Standing Committee initiative was prompted by a motion on the development of a national senior’s strategy by Ontario MP Marc Serre. He wanted to remind Canadians that seniors still have a value to society. It is hard to understand how anyone could think differently.

Improving access to high-quality health care for seniors will help Canadians of all ages get access to care.

But for those you take a more cynical, self-interested view of the world, health experts including the Canadian Medical Association say improving access to high-quality health care for seniors will help Canadians of all ages get access to care. So, by doing the right thing, we all benefit.All of us must acknowledge there is no way to reverse the demographic changes taking place in this country. Therefore, it is vitally important that our voices are heard by those controlling the federal, provincial, and municipal purse strings.

Last year the Alliance for a National Seniors Strategy called for a strategy based on four pillars for seniors: independent, productive, and engaged citizens; healthy and active lives; care closer to home; support for caregivers.

It said now is the time for all Canadians to help create the best country to grow up and grow old in. In comparison with some other countries, Canada has a lot of work to do, but that should not be the reason we don't move forward immediately.

For some of us, we witness every day the struggles some seniors endure to maintain their independence because it means so much to them. That determination and stoicism should not be ignored. Instead, we should look for ways to make their burdens lighter. Canada is changing, there is little we can do about that. But we do have the ability to make it better for everyone, especially those who did so much to make this country great.