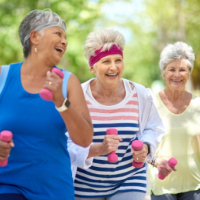 How Much Should Seniors Exercise To Improve Brain Function?

To boost their reasoning skills and the brain's processing speed, seniors may need to exercise for 52 hours over a period of 6 months, concludes a new study. The good news is that low-intensity exercise such as walking has the same benefits — if it's carried out for this length of time.

As more and more research keeps pointing out, exercise does wonders for our brain.

For instance, a recent study that Medical News Today reported on shows that running protects our memory from the harmful effects of stress.

Additionally, research has shown that exercise helps to prevent the aging of the brain and to keep mild cognitive impairment (MCI) a precursor of dementia in seniors at bay.

But exactly how much exercise do seniors need to fully reap these cognitive benefits? And for how long do they have to do it?

To find out, researchers led by Joyce Gomes-Osman, Ph.D. from the University of Miami Miller School of Medicine in Florida set out to conduct a meta-analysis of existing studies.

More specifically, they examined all the randomized controlled trials in which a group of seniors exercised for a minimum of 4 weeks and had their memory and reasoning skills compared with those of a control group at the end of the intervention.

Gomes-Osman and her colleagues looked at 98 studies that summed up over 11,000 participants. The study participants were 73 years old, on average, and 59 percent of them were deemed clinically healthy.

Twenty-six percent of the seniors had signs of MCI, however, and 15 percent had fully developed dementia.

Of all the types of exercise tested by these studies, aerobic walking, was the most common.

Other studies used strength training exclusively, while a few papers showcased the effects of yoga or tai chi.

The study revealed that at least 52 hours of exercise over an average period of 6 months can lead to a better processing speed, which refers to the amount of time that the brain needs to process information or carry out a task.

This beneficial effect was noted among both those deemed clinically healthy and those who had MCI.

Additionally, healthy people showed improvement in their executive function that is, the brain's ability to set and achieve goals, plan ahead, and come up with strategies. The brain's executive center also deals with "self-monitoring and inhibition."

By comparison, those who only exercised for 34 hours over the same 6-month period did not get any benefits regardless of whether they were healthy or had MCI or dementia. Finally, the research didn't find a link between the amount of exercise and memory.

As for the exercise types, they were all equally beneficial for the seniors' thinking skills. Strength training, aerobic, or mind-body practices such as yoga all improved these skills.

"Only the total length of time exercising could be linked to improved thinking skills," says Gomes-Osman."These results suggest that a longer-term exercise program may be necessary to gain the benefits in thinking skills," she adds.

"We were excited to see that even people who participated in lower-intensity exercise programs showed a benefit to their thinking skills." Joyce Gomes-Osman, Ph.D.

"Not everyone has the endurance or motivation to start a moderately intense exercise program," she concludes, "but everyone can benefit even from a less intense plan."