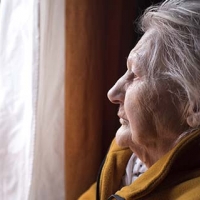 It's Not Really 'Blue Monday,' But The January Blues Hit Hard For Seniors

January is not a good time for 68-year-old Vancouver resident Kristen Ramsden.

Until recently, Ramsden worked at Vancouver Coastal Health and in an assisted living facility. Now, alone for most of the day with her husband at work and her two kids living out of town, she's the one seeking support — especially at this time of year.

"I spend a lot of time alone," Ramsden said. "I do notice that I'm missing the sun, I'm missing some warmth, I'm missing connection because Christmas is over."

The third Monday of January is sometimes called Blue Monday — the saddest day of the year. The term was coined in 2004 as a marketing ploy to sell winter vacations, and its scientific validity has since been mostly debunked.

But some seniors advocates in British Columbia say January poses serious challenges for the elderly — lousy weather that limits mobility, a lack of sunlight and the isolation that contrasts with the holiday period.

Daniel Fontaine, CEO of the B.C. Care Providers Association and chair of the Canadian Association for Long Term Care, said he definitely notices some seniors struggle at this time of year.

"When people are isolated, when they're not getting that interaction with other people, it can have very detrimental, negative health effects."

A recent study suggests that loneliness can be as unhealty as smoking 15 cigarettes a day.

Widows and those with children who have moved away are particularly at risk, she said.

"Someone who is lonely is most usually unsatisfied with the type or the quality of social relationships in their lives," Ibarra said.

Ibarra's organization tries to remedy both of these problems in a few different ways, but one approach is organizing community events like potlucks, barbecues and holiday parties.

The people invited all have a connection to the organization, Ibarra says, so they feel safer attending and interacting with others than if they were to just show up to an event where they don't know anyone.

Ibarra said she also ensures that the events the foundation organizes are close to where those invited live, so getting there isn't a problem if they have mobility challenges.

Another solution Ibarra suggests for the foundation's clients is to make an effort to connect with others — even with something as simple as a weekly card game with others in their building.

That's what Ramsden finds herself doing in the darkest months of the year, whether she feels like it or not.

To counteract her loneliness, Ramsden has joined the South Granville Seniors Centre. She wishes there was more funding for seniors centres, especially as more baby boomers retire.