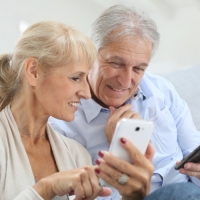 Many seniors donít own a smartphone. Experts say it might be a ëgapí in tracking apps

As Canada steadies its coronavirus cases, contact tracing is quickly becoming the backbone of control and containment.

A federally backed tracing app is on the horizon, and experts have said that about a 60 per cent participation rate is needed in order for it to be truly helpful for tracking the spread of the virus.

Since the method is reliant on owning a smartphone, it might miss the mark with some demographics, experts say.

“That’s the tricky part here — you need an app that is endorsed but also adopted,” said Emily Seto, an engineer and health technology specialist at the Centre for Global eHealth Innovation at the University of Toronto.

“There are barriers. Some people don’t have smartphones… So how do you distribute this type of technology? How do you get it into the hands of the people who actually need it?”

There are “all kinds of vulnerable populations” that are unlikely to have or use smartphones, Seto said. Older Canadians are just one of them.

Sixty per cent of seniors (defined as individuals aged 65 and older) reported owning a smartphone in 2018, according to Statistics Canada’s Canadian Internet Use Survey.

“The tricky part here is that you’re looking at 65 and over as all seniors, that’s not equally distributed,” said Seto. “As you get older, that drops off. Those are likely the even more vulnerable parts of the population right now.”

A recent survey by the Media Technology Monitor (MTM) looked at technology use among seniors aged 73 and up. It found that a much lower number of seniors in this age bracket — 34 per cent — own a smartphone. About 39 per cent of seniors have no cell phone at all, it said.

“It is a gap,” Seto said. “But it’s only one of the gaps right now… You need a lot of people to use this for it to work.”

Singapore is trying to fill that gap. The government has started distributing a digital contact-tracking device to people who aren’t digitally connected but are at a higher risk from the coronavirus, CNN reported. The TraceTogether Tokens work in the same way as the country’s contact-tracing app, which uses Bluetooth to alert users if they’ve been in contact with a positive case.

The device sends signals to other tokens or smartphones with the app. They collect proximity data, rather than geolocation data, and have no cellular or internet connectivity, meaning encrypted data cannot be taken from the token remotely.

Canada has nothing similar in the works, and Health Canada did not answer when asked about how it might target or encourage seniors to participate in the COVID Alert app when it’s released.

Kerry Bowman, a professor of bioethics and global health at the University of Toronto, believes an understanding of consent in downloading apps might stand in the way for some demographics.

“There’s a heightened challenge toward informed consent per senior population,” he said. “I’m not saying it’s beyond people’s comprehension, but they may be less knowledgeable about emerging technologies and their use.”

It may come down to communication, he added.

“People could say, ‘I’ve never had a cellphone or any of this stuff in my life and I don’t want one at 80 years old,’ but by appealing to the fact that it’s not really just about them, but the safety and well-being of a lot of people within a society, that appeals to most people.”

Once launched, Canada’s app will notify users based on a number of criteria, including if they were within two meters of a person who tests positive for the virus and if that contact was over an extended period of time. The app will be available for download on a volunteer basis.

Susan Bondy, an associate professor at the Dalla Lana School of Public Health at the University of Toronto, doesn’t think it’s necessary to rally seniors to get the app, or target them through another method.

“Seniors, especially if they’re vulnerable, need to be connected to a human very rapidly,” she said. “So, the cellphone app or this little dongle in Singapore — which is interesting — they’re still not going to be able to report the needs for that senior.”

Bondy said the app is targeting the demographic it should be — those who carry a smartphone.

“We’re trying to reach a specific group of people that is moving around in larger social interaction networks. That’s not seniors,” she said. “Our job as members of society during a pandemic is to minimize the number of people with whom we have close contact. People who are risk-averse will take their contacts from two down to zero. People who are not will bring it down from a hundred to merely 10.”

Ultimately the app “is only adjunct to classic shoe-leather contact tracing that we’re already doing,” she said.

Public health units in each province and territory are leading the effort to identify, educate and monitor individuals who had close contact with a COVID-19 case, but thousands of Canadians have registered to volunteer as contact tracers since April.

On top of grassroots tracking initiatives, like sign-in sheets at restaurants and stores, Bondy said the capacity of human resources has expanded “incredibly.”

“These apps are just to help curb the incredible workload burden,” she said. “And they’re targeting the right people.”