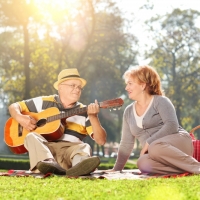 It may not be Animal House, but it is free room and board and a chance to enrich the lives of seniors with music.

In a first for Canada, a new London seniors’ home opening this October is recruiting three Western University music students as live-in minstrels to entertain and engage with the residents.

Oakcrossing will open this October near Sarnia and Wonderland roads with 98 suites for active seniors and three for students.

In exchange for a free suite and meals, the students will be expected to spend about 12 hours each week practising in common areas, performing recitals and helping residents revive their own music skills.

“It just means living with the residents and sharing their (musical gifts). Why not practise with a real, engaged audience instead of by yourself?,” said Heather Gingerich, director of employee and community engagement at Peoplecare Inc., which also runs seniors’ homes in Stratford, Tavistock, Delhi, Kitchener and Cambridge as well as long-term-care homes, including an Oakcrossing in London.

She said Peoplecare got the idea from news stories about a similar program that has been operating for about seven years in Judson Manor near Cleveland, Ohio.

Gingerich, herself a graduate of Western’s music program, believes recruiting the students is a good investment because it will enhance the atmosphere of the home and give it an edge in the market.

The students, in turn, get a built-in fan base. “Seniors are the most welcoming audience. They will sit and listen and be such a support system and become their champions,” said Gingerich.

The company contacted the Western music faculty in May and circulated information to students. About 30 students expressed interest. PeopleCare is still accepting applications from students before making offers to the final three.

Gingerich said the company is leaning toward more mature students in their third or fourth year or in a graduate program.

She recognizes some students, especially younger ones, might balk at living in a seniors’ homes.

“This is not going to be a good fit for every student. People will self-select,” she said.