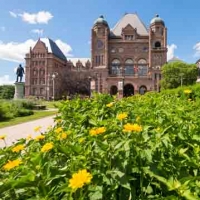 Like speeches from the throne, budgets are aspirational documents delivered by the governing party to outline their spending priorities, with hopes of continuing to be the governing party. Given how close today’s Ontario budget is to the June 7 provincial election, a healthy dose of skepticism is warranted.

This budget leaves the impression that the Ontario Liberals are gambling that Ontarians will forgive significant deficits if it means large investments in social spending. Finance Minister Sousa delivered a $600 million surplus for 2017-18 – but there will be a deficit until at least 2024, projected to be $6.7 billion in 2018-19.

The Liberals are focused on making “life more affordable” for Ontarians. While tax cuts were predicted, there will instead be adjustments to tax brackets. The government is also looking to raise hundreds of millions in new revenue by closing tax loopholes and catching more tax cheats.

In 2018-219, Ontario hospitals are set to receive an additional 4.6 per cent or $822 million in funding. This is on top of a 3.2 per cent increase included in last year’s provincial budget.  Hospital crowding has reached crisis levels in Ontario. This money is intended to reduce wait times and address the ongoing capacity issues to provide better and more timely care. How this will be measured and where the accountabilities lie were not detailed.

Investments in homecare and community care totaling $650 million over three years will include $180 million specifically to increase hours of personal support and caregiver respite, and to increase nursing and therapy visits. Additionally, the budget promises an investment of $23 million to hire thousands more personal support workers (PSWs) to prop up homecare service and $38 million for PSW training, including behavioural support and palliative care training to support challenging care needs.

For those seniors looking to long-term care homes, $300 million will be invested over three years, aiming to increase care hours and hire additional nurses and PSWs.

By the spring of 2018 caregivers can expect to see a new caregiver organization to help with this role by providing information and resources.

An additional $15 million will be provided for community-based palliative care. In addition, the province will complete its previously announced plan to create 20 new residential hospices across the province and investments to enhance visiting hospice volunteer services.

The new Ontario Drug and Dental Program for individuals and their families who do not have coverage from extended health plans will start in summer 2019 with an investment of more than $800 million over the first two years. Participants will be reimbursed for up to 80 per cent of eligible prescription drug and dental expenses, up to an annual maximum of $400 for singles and $600 for couples, plus $50 for each child in the family.

As previously announced, Budget 2018 promises to make prescriptions free for people 65 years and older - but the OHIP+ expansion is limited to seniors who don’t have a private health insurance plan. Starting Aug. 1, 2018, Ontario seniors without drug insurance will have access to 4,400 medications at no charge. The program will cost $575 million when fully operational in 2020-21.

Seniors on the Ontario Drug Benefit program (ODB) will also see their deductible and co-payment eliminated. This is estimated to save seniors on average $240 a year.

People with private plans like the Public Service Health Care Plan (PSHCP) and Pensioners Dental Services Plan (PDSP) shouldn’t drop their coverage yet – the PSHCP covers more than just medications and there’s no confirmation yet on which drugs OHIP+ for seniors will cover. The Association will have more on how this will impact federal retirees over the coming weeks.

“Pharmacare has long been an important part of our advocacy work and it will help to keep our aging population healthy and make life more affordable for millions of seniors in Ontario,” says Federal Retirees president Jean-Guy Soulière. “We hope the rest of Canada will take notice as we move forward with the implementation of national pharmacare.”

“While these funding commitments are welcome, what’s needed is long-term, stable investment that keeps pace with the demands of our growing and aging population,” notes Soulière. “And its high time for a national seniors strategy – something we’re still lobbying for with our governments.”

Financially secure seniors continue to contribute to their communities – and to our economy – but there is little mention of either pension or retirement income security measures in Ontario’s budget. More Ontarians are working without employer-sponsored pensions, and personal savings vehicles like RRSPs are under-utilized. After the meagre enhancements made to the Canada Pension Plan in 2016, retirement security seems to have fallen by the wayside. The savings gap and the lack of retirement income security have not disappeared and need to be addressed. The Ontario government, however, has promised to make amendments to the Pension Benefits Guarantee Fund (PBGF) to make increases retroactive to May 19, 2017. As a result, the increases would apply to former Sears Canada employees.

In a new Seniors’ Healthy Home Program, the Ontario government is looking to invest $1 billion starting in 2019-20 over three years. This program aims to provide up to $750 per year for every eligible household led by a senior who is 75 years or older to help with the costs of maintaining a home. The budget promises to consult with seniors’ groups and stakeholder on this new benefit and specifically what could be covered.

The province brought a retirement security focus to personal support workers. Ontario will invest $65 million over the next three years to pilot a group Tax-Free Savings Account program on behalf of eligible PSWs. PSWs who make additional contributions would have their contributions matched to a maximum of 2.5 per cent of their earnings. The province will consult on this initiative. How this commitment plays out with plans announced in late 2017 to create a new provincial agency of personal support workers, moving a significant chunk of homecare supports into the public sector, remains to be seen.

Many of the announcements made were tied to younger individuals and families. The largest of these was a promise of $2.2 billion dollars over three years for free daycare for pre-school aged children, starting in 2020.  For older students, the government promised $2.1 billion over four years for additional access to mental health workers in secondary schools, youth access to therapy and counselling. Another $300 million was flagged for special needs education, including 2,000 new school staff, education assistants and language specialists.

Long overdue and important investments have been made in this Ontario budget, and promised investments in health care and retirement security are heartening – yet the budget forecasts six years of deficits.  Ontarians will be watching the coming campaign season closely to see whether these will be promises kept – and how much they’ll really cost in the long run.