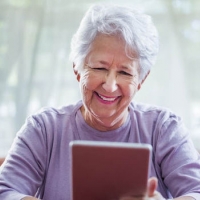 Rise of the Social Seniors Revealed

Record numbers of older people are embracing smart and social technology, with a quarter of over-75s using tablet computers, and half of online baby boomers taking to social media.

The findings are from Ofcom’s annual Adults’ Media Use and Attitudes report, which reveals how people use, understand and feel about the media and communications they rely upon each day.

This year’s report shows striking growth in older people’s use of technology between 2015 and 2016. Baby boomers aged 65-74 are increasingly connected, with four in ten (39%) using a smartphone, up 11 percentage points in a year.

Ofcom’s research finds that older adults are more connected than ever, but this generation still spend less than half the amount of time online than the younger generation. Over-65s spend 15 hours online each week, compared to 32 hours among 16-24s.

Social seniors aged over 65 also have different experiences online. Seven in ten (72%) over-65s said they have not seen anything to offend or upset them in the last year, compared to 56% of adults generally.

This may reflect older users’ more limited use of the online world. Most over-75s (51%) are ‘narrow’ internet users, meaning they typically carry out limited online activities - this compares to the average of 28%.

While older internet users are increasingly active online, some older people lack online confidence. A fifth (20%) of people over 65 describe themselves as ‘not confident’ online, much higher than the average (7%).

One reason could be that many older users are new to the internet. Some 21% of internet users over-75 went online for the first time in the last five years – twice the wider average.

For those older internet users lacking confidence, this is particularly pronounced when managing personal data. Almost one in five internet users over 65 say that are ‘not at all confident’ about this.

And 16% of internet users over 55 said they ‘never’ consider the data or privacy implications when posting photos online – the largest proportion to say ‘never’ among all age groups.

Some older internet users were also unsure about sponsored links in search results. A quarter (27%) of search engine users aged over 75 said they were unsure, and less than half (46%) felt able to identify sponsored links.

Similarly, awareness of personalised advertising seems to be lower among some older users – with seven in ten (72%) over 75s, and six in ten (60%) 65-74s saying they were unaware of this type of advertising, compared to the average of 44%.